State officials have announced the arrest of three women and three men for their alleged roles in an insurance scam that collected $187,000 in fake claims by setting rental properties on fire in Miami-Dade, Lee, and Collier counties. 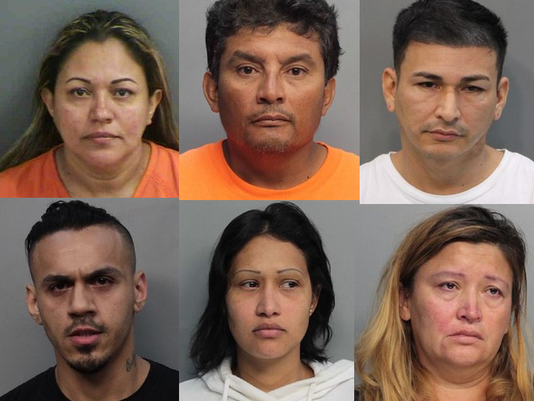 State officials have announced the arrest of three women and three men for their alleged roles in an insurance scam that collected $187,000 in fake claims by setting rental properties on fire in Miami-Dade, Lee, and Collier counties.

As a result of a joint investigation by the Miami-Dade Police Department and the Bureau of Fire and Arson Investigations, authorities have arrested Gennie Avila Lainez, Walther Avila Lainez, Yamina Grafal, Vicente Olana, Kenia Martinez-Rosales and Luis Rosales for allegedly playing a part in the crime ring.

According to a report by the Naples Daily News, Walther Avila Lainez, his sister Gennie and/or Garfal would find homes to rent and then recruit a “straw renter” who would lease the property and purchase renters insurance to cover the contents of the home.

After enough time had passed, Walther Avila Lainez would stage an accidental fire and the “straw renter” would report their loss to the insurance company, the report said. Unsuspecting fire crews and investigators would classify the cause of the fire as accidental or undetermined, the Naples Daily News said.

The first fire, which occurred in 2009 at a home Gennie rented in Golden Gate, saw Universal Property and Casualty Insurance Corp. pay out $58,827 based on the renters insurance policy she purchased just two months prior.

However, when a second property went up in flames in Cape Coral, the same private fire investigator hired by the insurance company to interview Gennie recognized her brother Walther, who was now claiming the loss. The claim was denied as a result of the investigator’s suspicions, the Naples Daily News said.

The same private investigator would also determine that a 2012 fire at a Miami property, this time rented by Vicente Olana, was intentional. Olana admitted to investigators that Walther had put him up to it, according to the report.

Yamina Garfal and Luis Rosales would also later get caught for their part in a fire in Miami in 2015. The last suspect, Kenia Martinez-Rosales, was arrested in December 2016 for allegedly making misrepresentations on her application for insurance, according to the news report. Both Kenia Martinez-Rosales and Luis Rosales said they were promised $10,000 for their help in the scheme.