Hurricane season starts today, and researchers have updated their 2018 forecast to now call for a near-average season with at least two major hurricanes and a 51 percent chance of landfall on the U.S. coastline. 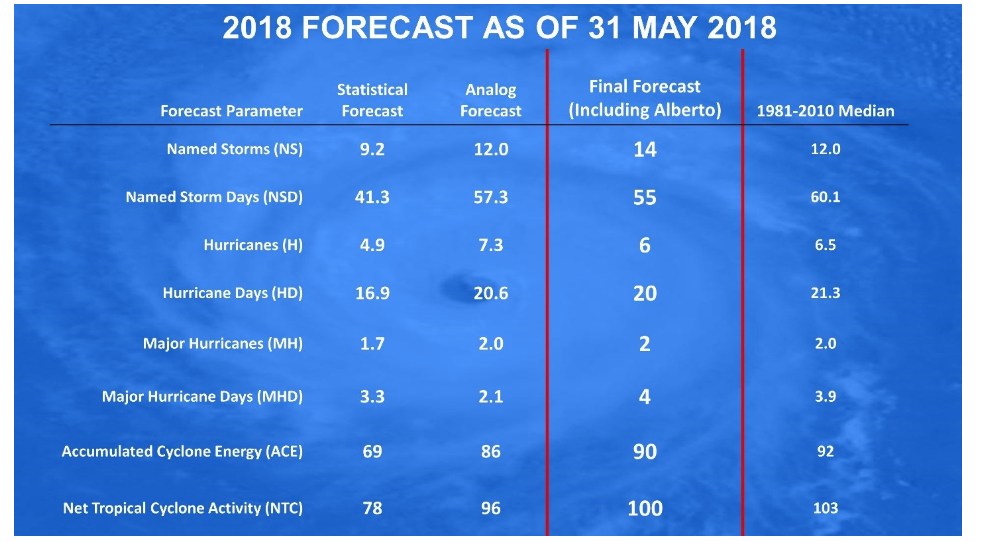 Hurricane season starts today, and researchers have updated their 2018 forecast to now call for a near-average season with at least two major hurricanes and a 51 percent chance of landfall on the U.S. coastline.

In April, the Colorado State University Tropical Meteorology Project said it was expecting a total of 14 named storms for the 2018 hurricane season, including seven hurricanes and three major hurricanes.

This forecast has now been slightly decreased to six hurricanes and two major hurricanes, according to a statement released yesterday. Including Subtropical Storm Alberto, which formed in May, the forecast is still for 14 total named storms in 2018.

The forecast decrease comes as the tropical Atlantic sea becomes cooler than normal, which provides less fuel for cyclone formation.

“The weak La Niña that occurred this past winter has dissipated, and there is the potential that a weak El Niño could develop by the peak of the Atlantic hurricane season (August-October),” a statement from CSU said.

“However, the forecast team believes that neutral ENSO (El Niño-Southern Oscillation) conditions are the most likely scenario for this year’s season. El Niño tends to increase upper-level westerly winds across the Caribbean into the tropical Atlantic, tearing apart hurricanes as they try to form.”

“It takes only one storm near you to make this an active season,” he said.

Hurricane season runs from June 1 to November 30. This season is predicted to be quieter than 2017, which saw 17 named storms, 10 hurricanes, and six major hurricanes.