New research shows that Florida is among the top 10 US states with the highest number of dog bite claims – a trend that is pushing more Florida homeowners insurance companies to limit their coverage for family dogs. 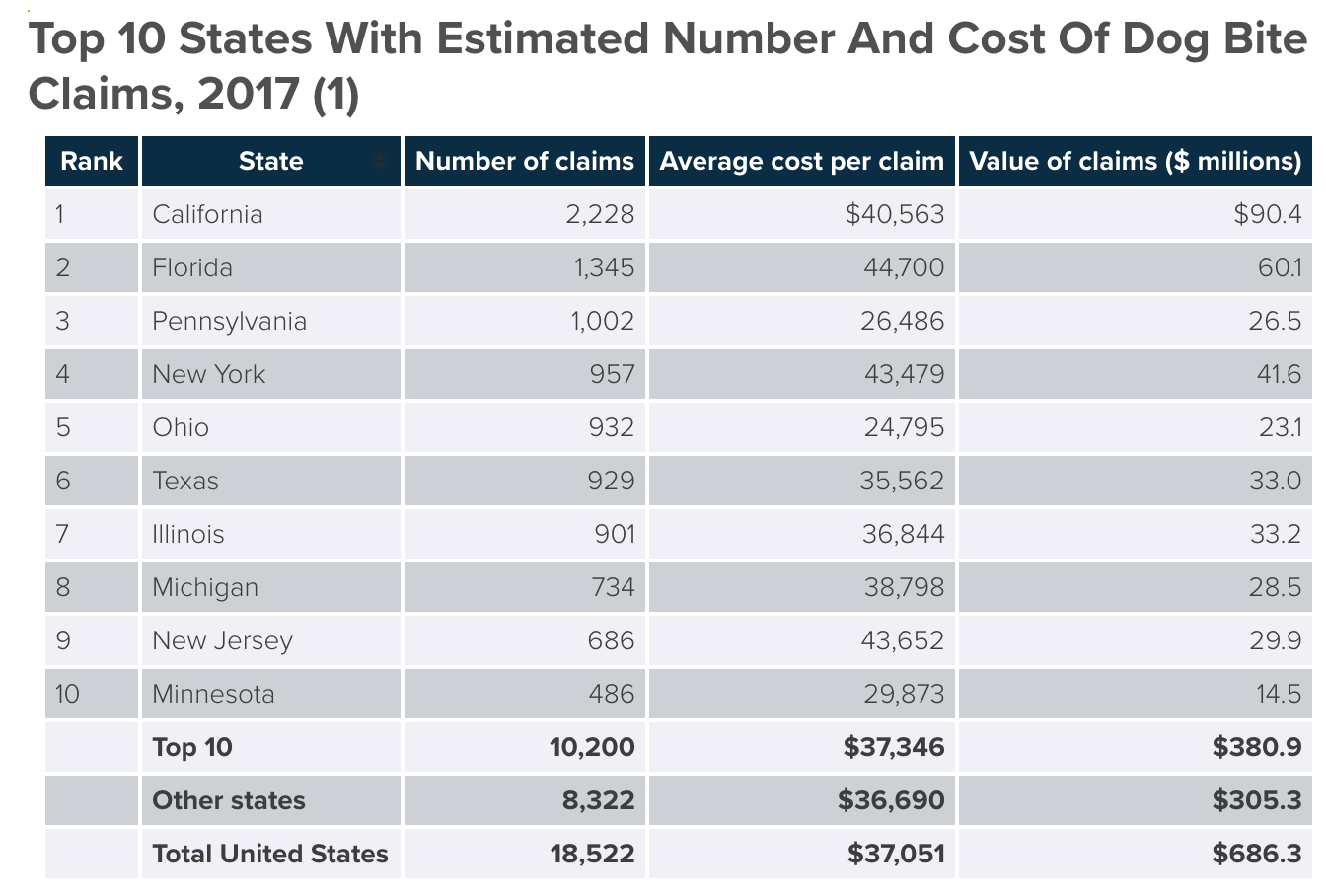 New research shows that Florida is among the top 10 US states with the highest number of dog bite claims – a trend that is pushing more homeowners insurance companies to limit their coverage for family dogs.

According to the Insurance Information Institute and State Farm, homeowners insurers nationwide paid out over $686 million last year in liability claims related to dog bites and other dog-related injuries.

“The average cost per claim nationally has risen more than 90 percent from 2003 to 2017, due to increased medical costs as well as the size of settlements, judgments and jury awards given to plaintiffs, which are trending upward,” the III said.

California took the number one spot for having the largest number of dog bite claims in the US last year at 2,228. Meanwhile, Florida had the second highest number of claims at 1,345. Florida also had the highest average cost per claim at $44,700.

“The trend in higher costs per claim is attributable not only to dog bites but also to dogs knocking down children, cyclists, the elderly, etc., which can result in injuries that impact the potential severity of the losses,” the III said.

The top 10 states include are shown in the image above.

About 4.5 million people are bitten by dogs each year, according to the Center for Disease Control and Prevention. Among children, the rate of dog-bite–related injuries is highest for those 5 to 9 years old. Over half of dog-bite injuries occur at home with dogs that are familiar to us.

Homeowners and renters insurance policies typically cover dog bite liability legal expenses, up to the liability limits (usually $100,000 to $300,000). If the claim exceeds the limit, the dog owner is responsible for all damages above that amount.

Some insurance companies will not insure homeowners who own certain breeds of dogs categorized as dangerous, such as pit bulls, while others decide on a case-by-case basis, depending on whether an individual dog, regardless of its breed has been deemed vicious, the III said.

You can find a list of dog breeds typically not covered here.

Once a dog has bitten someone, the carrier may charge a higher premium, choose to not renew the homeowners insurance policy or exclude the dog from coverage. Some companies require dog owners to sign liability waivers for dog bites, while others choose to not offer insurance to dog owners at all.

Some insurers might decide to cover a pet if the owner takes the dog to classes aimed at modifying its behavior.