This year's Atlantic hurricane season should see at least one major hurricane and 12 named storms, a new forecast report from researchers says. 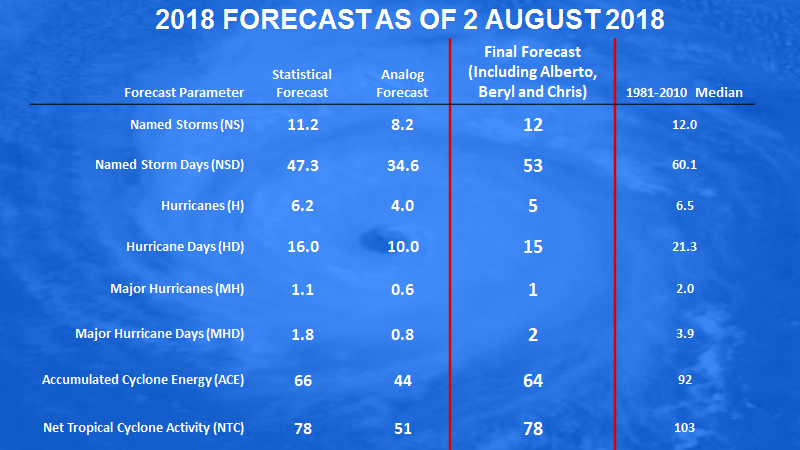 This year's Atlantic hurricane season should see at least one major hurricane and 12 named storms, a new forecast report from researchers says.

The Colorado State University Tropical Meteorology Project had updated its outlook this month to now call for a below-normal season with a total of 12 named storms (including Alberto, Beryl, Chris), five hurricanes and one major hurricane.

This prediction has changed from earlier forecasts, which called for a busier-than-normal season. The probability of a landfall has also been changed to 35 percent.

Still, residents are still urged to make the proper preparations.

“We continue to forecast a below-average Atlantic hurricane season. The tropical Atlantic remains cooler than normal, and there is a relatively high potential that a weak El Niño develops in the next several months,” the report states.

“The probability for major hurricanes making landfall along the U.S. coastline and in the Caribbean is below normal due to the forecast for a below-average season.

“As is the case with all hurricane seasons, coastal residents are reminded that it only takes one hurricane making landfall to make it an active season for them. They should prepare the same for every season, regardless of how much activity is predicted.”

El Niños tend to reduce hurricane activity through increases in upper-level winds that tear apart hurricanes as they are trying to develop. NOAA gives a slightly higher than 50% chance of El Niño development in the next few months.

This year’ season appears to be quieter than 2017, which saw 17 named storms, 10 hurricanes, and six major hurricanes.